Jaukae Bilum Products is a bilum weaving cooperative based in Goroka, the capital of Papua New Guinea’s Eastern Highlands Province. Established in 2002 by tireless bilum advocate, Florence Jaukae Kamel, the cooperative represents approximately 60 weavers working across two collectives. Florence’s home, ‘The Blue Corner’ farm, provides a base for a weaving collective of 40 women, while the second collective of 20 women weave out of Goroka’s Bilum Market.

Bilum weaving in an ancient cultural practice for women in Papua New Guinea, where the artform has been passed down the matriline over thousands of years. Goroka is known as the ‘home of bilum’, and plays host to the prestigious annual Bilum Festival, established by Florence to bring international attention to the art of bilum weaving. A university town and base for many NGOs, Goroka is fringed with rural farmlands. This makes for a vibrant mix of urban and rural worlds that collide in a riot of colour and pattern – an energy that is encapsulated in the unique designs of the region’s weavers. 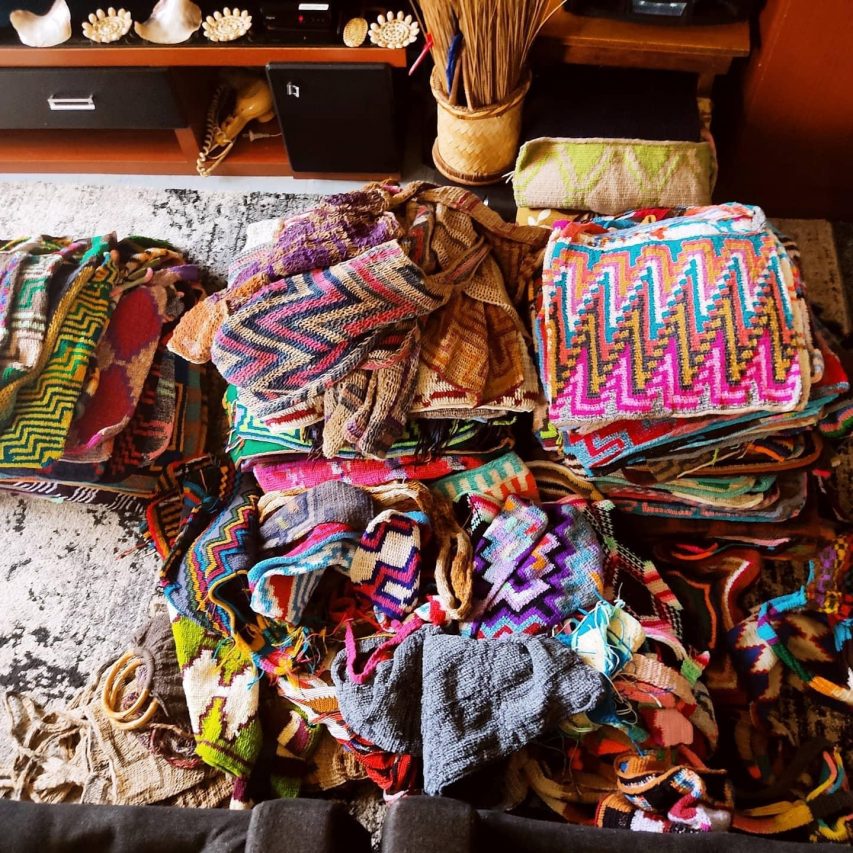 Due to economic development, access to traditional fibers in Goroka is increasingly difficult. As a result, the weavers of this region primarily use acrylic fibers in a rainbow of colours, their bilums characterized by vibrant contemporary patterns reflecting their urban surrounds. Natural dyes such as turmeric, ginger and guhi, a vibrant red native tree seed, are also used in some of the more traditional designs. Other designs are strikingly contemporary, featuring pop-art like motifs such as the notorious AK47 design, which originated in Goroka before spreading across the rest of the country.

Florence’s background in rural development and desire to help empower the women of her district lead her to establish Jaukae Bilum Products. The weavers represented by the cooperative are mostly single mothers, widows and married women supporting extended families. Single mothers are socially ostracized and often live in extreme poverty in Goroka. The weaving cooperative has become a vehicle for these women to gain financial independence, security and respect within their communities, creating a better quality of life for themselves and their families.

The cooperative works in the truest sense of the word – the weavers work together on their own terms, under flexible conditions to fit in with their family and subsistence obligations. Children watch and learn, gardens are tended, meals cooked, and stories, designs and techniques exchanged. Florence describes Jaukae Bilum Products as a, “business in the home”. This ideology is at the heart of the cooperative, which works to translate an ancient cultural tradition into a 21st Century feminist enterprise, catering to a growing demand on the global market.

The cooperative has also paved the way for other grassroots, women-led enterprise in the region:

“It has made bilum weavers business-minded, developing their own ideas into new businesses. The weavers have developed a little piggery, a canteen and a roadside market – it has given weavers the confidence to set up other businesses in our rural communities and our villages, and their lifestyle has improved as a result.”