This interview has been edited for flow and clarity. 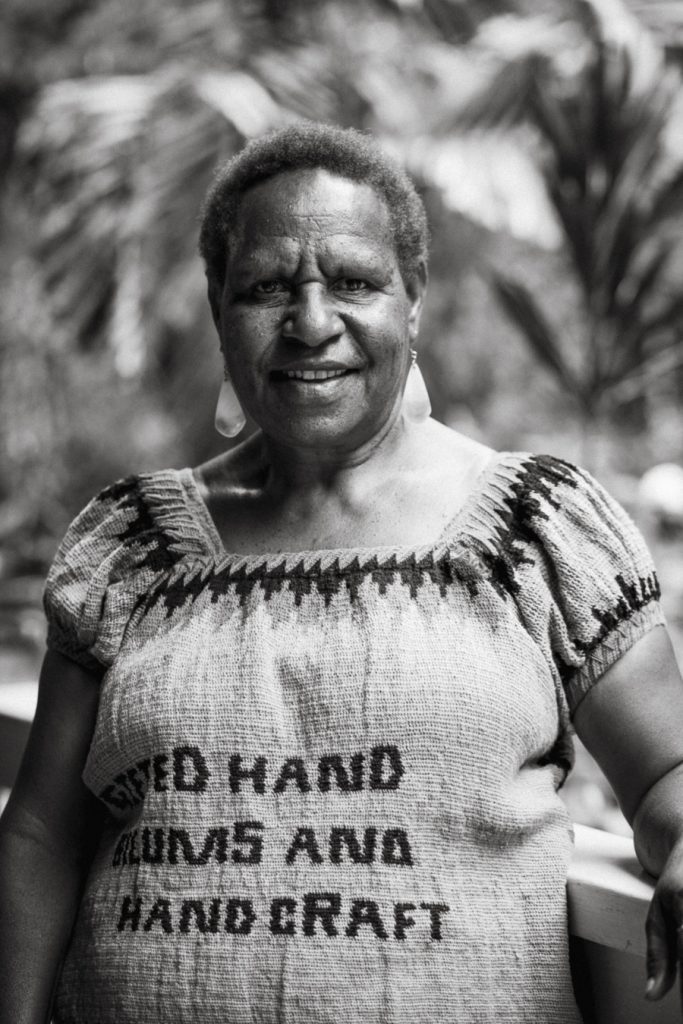 Fransisca:      Every day I drive from my house to the village, and I see ladies sitting on the roadside selling smoke and betelnut. Those women have no paid job, their husbands are also often not working – they are single parents, they are divorced wives, they are widows, and their only means to make an income is just to sit there and to sell smoke and betelnut. Every day, I would see them sitting there and it really bothered me.

So, I was thinking, how can I help these ladies? I started with 200 kina for materials for 10 women to start making bilums. I took the bilums they made to Port Moresby, and I brought 500 kina back to them.

OoT:            Wow, what a gift! And what difference has the cooperative made to the lives of these women?

Fransisca:      It makes a very big difference in their lives, and they are so happy! They can afford to pay their school fees from previous years, and from this year. They get to make bilums and sell other things as well. They can afford to buy stronger lights assist them at night, because most of them don’t have electricity. They do have a house, but they often can’t connect to the power grid because most of them live in rural areas and villages.

OoT:             It sounds like you’ve made a significant difference to their quality of life. Tell us, are you a weaver yourself Fransisca?

Fransisca:      In Chimbu province we make traditional bilums using natural plant fibres. We have a distinct style called Simbu-tan. We use traditional dyes made from tubers and leaves to colour the bilums red, black, and blue.

Fransisca:     Our ancestors traditionally used bilum for carrying food from garden to house and carrying babies. A special mat is made from leaves and put inside the bilum for the baby to sleep on. It is soft and the baby not too hot inside – it’s cool, and they sleep comfortably. 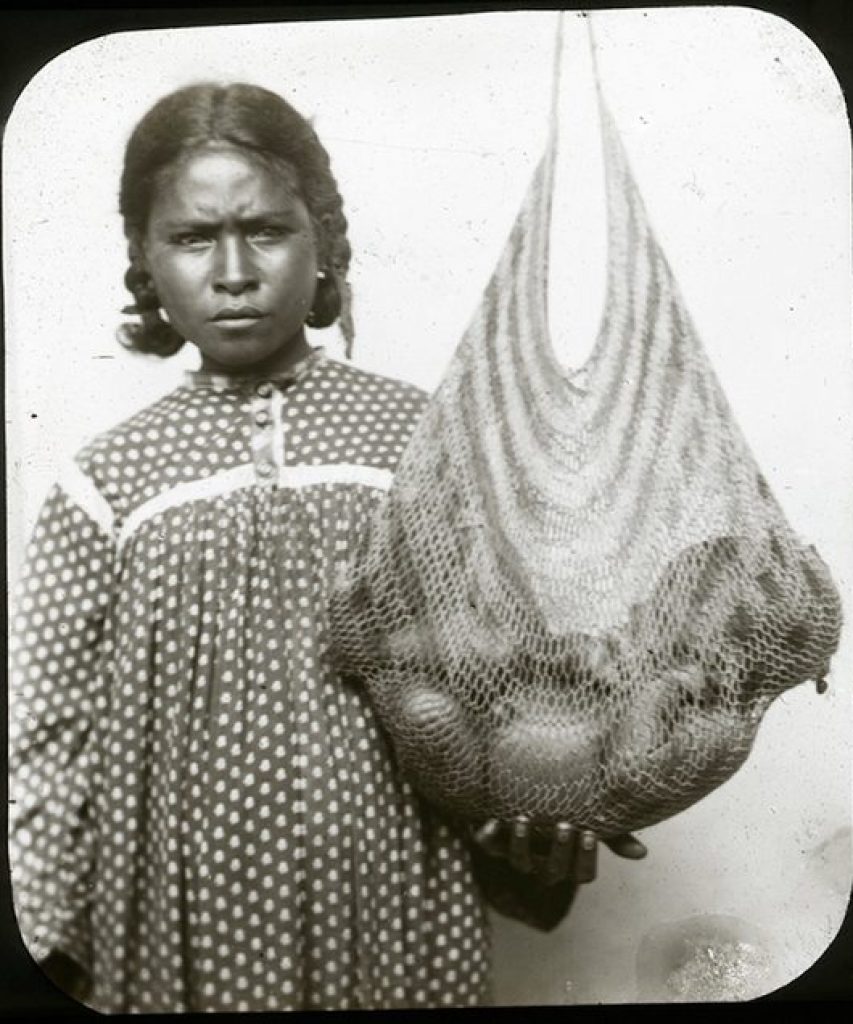 Fransisca:     My mother taught me to weave bilum when I was a little girl. That is the tradition in my country. Even now, I am still learning from other ladies too. Sometimes they teach me new patterns that are designed now. But the traditional bilum I learned from my mother and grandmother.

OoT:           What a beautiful tradition! It sounds like bilum is a strong part of your cultural heritage. Do you teach your children today?

Fransisca:    I have five children and more than ten grandchildren! I have taught my daughters to weave and now I am teaching my granddaughters, just as my mother and grandmother taught me.

OoT:              It sounds like bilum weaving in PNG is a very important way for women to have independence and control over their lives?

Fransisca:      Yes, true, true. The women were traditionally using bilum to carry food from the garden and to put babies inside. But now, these days, bilums are very important because every woman is selling bilum, that’s their only income. Most of our women are subsistence farmers, and many are unwed mothers – only a few are working women earning salaries. Around 70% of the women in PNG do not have a salary. They are raising children and growing food to feed themselves and caring for family.

OoT:             So, this is a way for them to bring some financial security into their lives to help them do those things?

Fransisca:     It would reflect badly on her, the reflection would be negative for a good, young lady. So, every woman must carry a bilum, to show that you are a female, you are a woman – you carry food in a bilum, you carry babies, you cannot be a woman in my country without a bilum.

OoT:            So, it demonstrates that you’re a strong woman, and that you fulfil the cultural obligations of a woman? 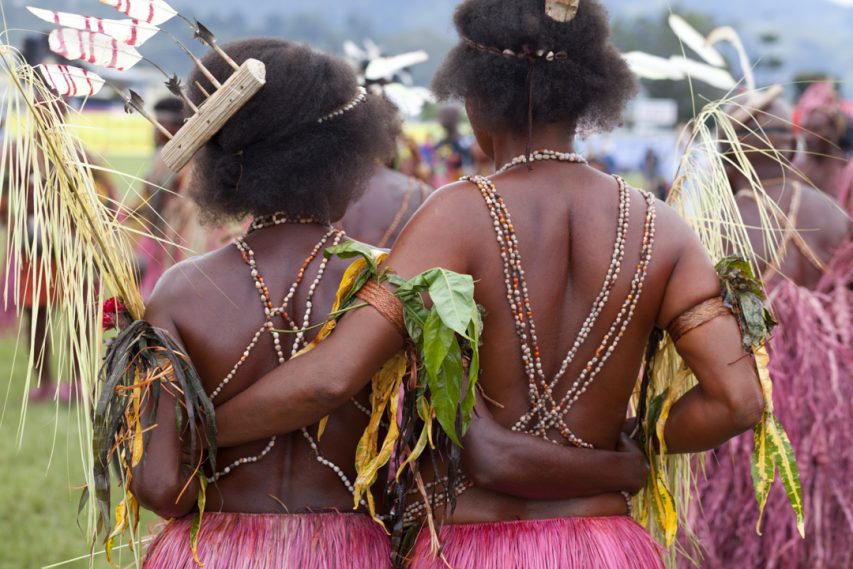 Fransisca:      It’s quite a long process, especially for natural fibre bilums. We have to cut the plants and get the materials to dye it from the garden. We have to trim the fibre, dry it, then we have to peel the skins of the parts of plants used for dying. When the fibres are ready, we twist it again, and we dye it, and then we start weaving the bilum.

Fransisca:     It depends on the type of bilum. A small, natural fibre bilum takes about a week to make. A medium sized one would take about 3 weeks, and a large sized bilum or a baby bilum with Simbu-tan takes about 6 weeks. But the women in the village – they have to go to the garden, they have to do other women’s activities, and only in their free-time, they make the bilum. That’s why it takes a bit longer.

But for Gifted Hands, if we have a group of women making bilum, we have a timetable, we concentrate, we give up our time to make bilum, so we can finish within a short period of time. That is different from the women in the village who have to make a garden, go out and fetch the pigs, you know cooking, all this stuff. 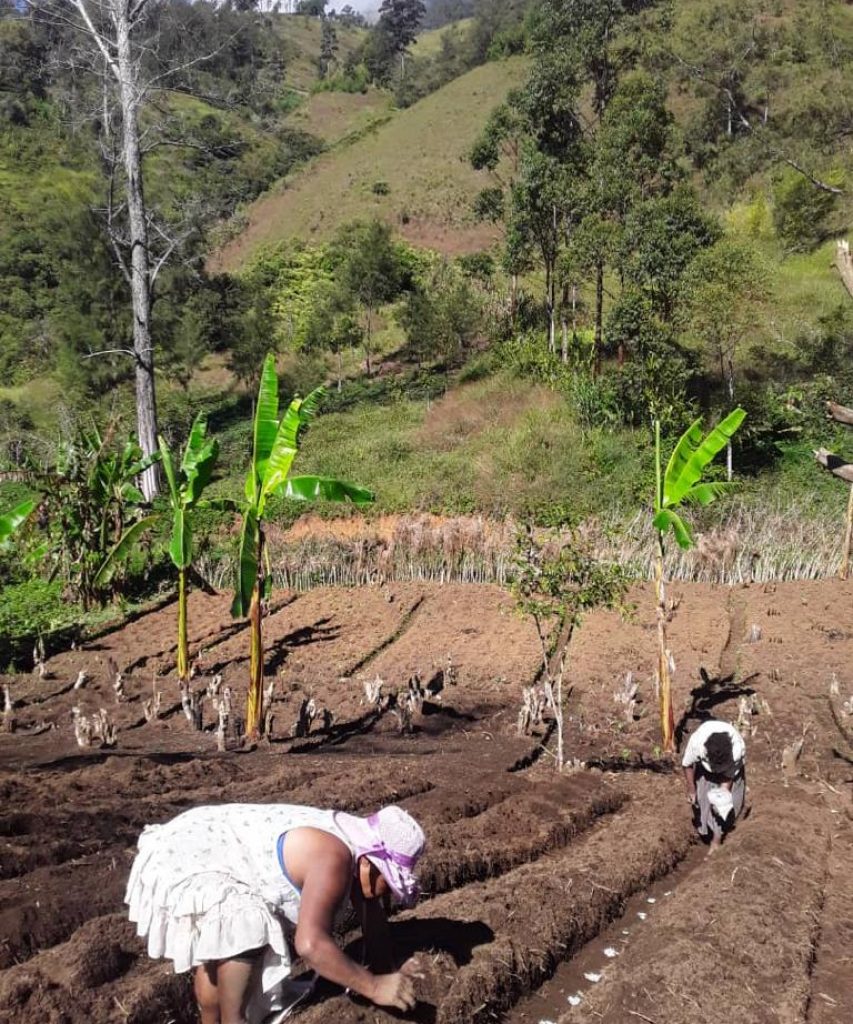 Fransisca:      Gifted Hands is a centre where women all come and sit together and weave. We have a program, we come together, especially when we have orders to make bilums. When we have orders, we have a timeframe to work to and a certain number of bilums we need to make. We have to have meetings and delegate responsibilities. We come together and have a chat about who is making what. But when there is no order, we just keep on making.

Fransisca:      Initially, we had 30 members of the Gifted Hands cooperative. But now we are extending membership through the Catholic Women’s Association, an organisation I am the president of, to include more weavers in the program.

OoT:           With 30 current members all with families and children to feed, Gifted Hands is affecting a lot of people, making a positive impact.

Fransisca:      We are. And hopefully more in the future!

OoT:             Do you keep special bilums from your and other family members? Are they passed down?

Fransisca:     Yes, we do, we do. We keep some as our memories because, those people have died. So, we put their bilums in the house and we say, ‘that’s from my grandmother, that’s from my mother’. We do keep bilums, we value them because when we are young girls, our grandmothers and our mothers make such beautiful bilums and give them to us as part of a gift to carry so that that bilum will reflect that you are a young girl. So, we remember the bilums that were given to us by our mothers and grandmothers, they are special.

Fransisca:     Yes, that’s exactly what we do. We are doing it now too, for our little girls. For the little ones, we make small bilums, the younger ones, we make a medium sized bilum that they can carry like this across the shoulders. And when we send them away with their husbands, we make them a big bilum – we put everything inside there, and we send that young girl away to get married. 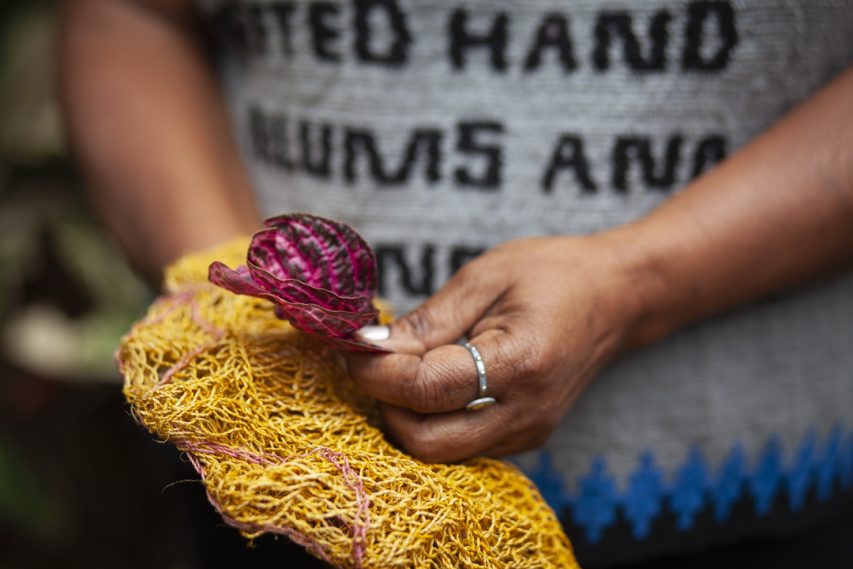 OoT:            Can you tell us a bit about your business structure Fransisca? How does Gifted Hands operate?

Fransisca:    Gifted Hands is not like a business, it’s more of a social enterprise. The weavers are making the bilums and we help them to sell directly to buyers. Gifted Hands is facilitating the sale of bilums, and the weavers come to Gifted Hands and collect their money. It’s not like one person’s business, we are just helping the women to sell their bilums.

The weavers can’t sell their bilums at the market because everyone in Chimbu is making bilum, so no one is no one is buying bilum. Goroka has a big market, but in Chimbu we don’t have the buyers. We sell the women’s bilums to international buyers because we are fortunate to have made some good connections.

So, the women weave the bilums and we facilitate the sales taking a small administration fee. If we are selling a bilum for 100 kina for example, 10 kina will go to administration costs, and 90 kina goes directly to the weaver. Sometimes I stay up all night measuring the bilums, posting the bilums – all these things I do not charge any fees for, I do it to help the women.

Fransisca:     In our society, especially in Chimbu, women find it very hard to make a living, and if they do not have money, they have all sorts of problems. So, when I work with women, I just want to make them happy. I want to see their smiling faces, that makes me happy. I’ve been doing this for the last 20 years with the Catholic Women. Through my service, I can see that the women have better houses, they are able to pay school fees for their children going to university, they have money in their bilums, and they are violence-free. They have food on the table, they’re respected by their families and the community, so I can see a big difference in the lives of the women.

OoT:             So, you’re building the capacity of these women to support themselves and become independent?

Fransisca:    Yes, that’s right. I am really thankful to our bilum buyers, especially our international buyers. When they buy our bilums, we make money to help the women, so a big thank you to those buyers, they are really making a difference in these women’s lives! 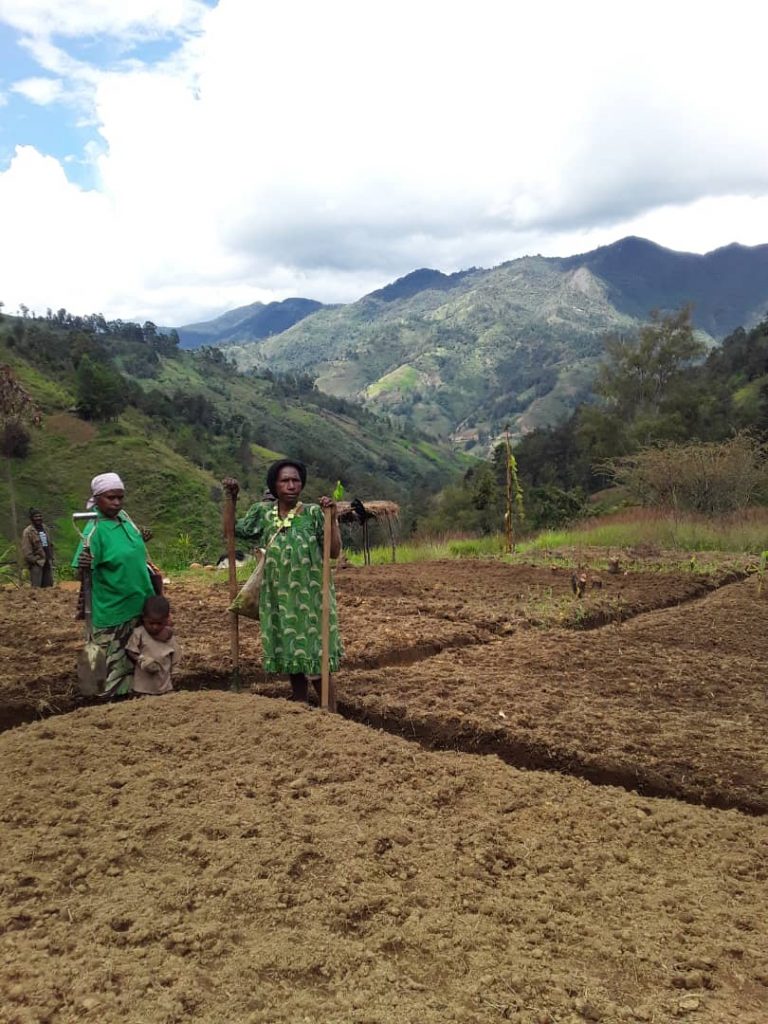 PrevPreviousLina of the Sepik
NextPapunya Tula Artists, Masters of the Western DesertNext
Liked it? Help us by sharing it on
Facebook
Twitter
LinkedIn