From Country to Couture

The Darwin Aboriginal Art Fashion Show is a glitzy affair, with the crowd dazzling in a riot of colours and fabrics that are immediately recognisable as hand-silkscreened silks from last year’s creations or from trips to the many art centres that dot the top end. I was lucky to get in following a ticket debacle that left me without my name on the list. It was a warm and balmy evening and after escaping the cold of the South, I was delighted to be waiting in the crush of people for the doors to open.

Grace Lillian Lee curated this year’s show, which was held at Sky Casino in an outside pavilion surrounded by palm trees. For those of you not familiar with Grace’s work, she wears many hats, including designer, mentor, curator and artist. Her most recognisable pieces are her woven necklaces that are a contemporary response to traditional Torres Strait weavings. The art centres and designers who participated in this year’s event were as varied as the country that they hail from.

The creations of Ikuntji Artists in collaboration with the Forkleaf took their cues from the wildflowers that are abundant in the landscape after the rains, teaming floral skirts with sneakers and plain t’s. Boxy shirts and dresses pieced together from several different screen-printed fabrics showed off the eclectic mix of artwork that Ikuntji is known for.

Lynelle Flinders has been working with Bana Yirriji Art & Cultural Centre in Wujal Wujal on some glamorous silk kaftans, all hand-painted and screen-printed to tell their stories of the reef and rainforests of Far North Queensland.

Kayleigh Gosselink teamed up with Palgun Wurnangat Art Centre from Wadeye, NT to create pieces with simple silhouettes depicting echidnas as well as turtle t-shirts, with lots of minty greens and vibrant Wadeye fabrics in lino, block and screen prints.

One of the most interesting collections was Hopevale Art Centre’s Collaboration with designer Shannon Brett. It featured necklaces that were made by wrapping fabric around seeds to make chunky statement pieces that showed off the fabulous screen-printed silks; quirky pant and shirt combos; flowing jackets; and the most divine gum flower print on cream silk that was shown off to great effect by a shirt dress with billowing pockets. All of Hopevale’s fabrics were printed by Publisher Textiles, who have been working with several art centres, including Babbarra Women’s Centre, whose Waratah print by Deborah Wurrkidj took centre stage. Babbarra has been creating fabrics for many years, and their expertise is evident. Simple dresses, pants and blouses were a perfect way to show off the bright, bold fabrics in all their glory. We are just a little bit excited to see that these can be purchased as well as cushions at Publisher Textiles’ online shop, and we’re even more pumped about their Mr T T towel. 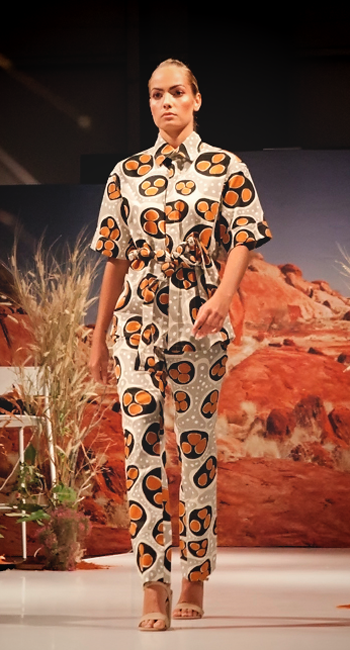 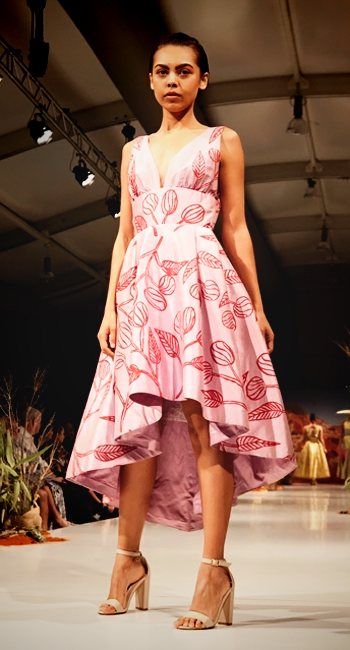 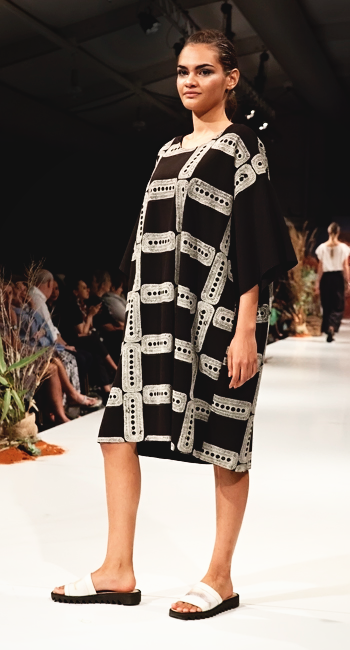 Shannon Brett has had a busy year, also teaming up with Yarrabah Arts to produce a line of striking separates in black-and-white monochrome with the occasional pop of red. They look like they are exploring new territory, and we will be watching this space.

There were many creations from students studying visual arts at the Batchelor Institute in Alice Springs. The students worked with Warlurkurlangu Artists on some very bold, form-fitting dresses. The show-stealing Sistagals partnered with Tiwi Designs from the Katherine campus to produce a laid-back collection that would be at home on any beach. We were lucky enough to see them model their own creations, and the gals sure can saunter!

Darwin designer Albertini showed us what can be done with the extraordinary fabrics from the Top End. The Acana print by Graham Badari from Injalak was transformed into a floor-length royal blue gown. Palngun Wurnangat Aboriginal Corporation’s Marlithen ‘Roberta’ Kinthari’s owl print on white silk elevated a wedding dress, and the classic Babbarra Bush apples print by Deborah Wurrkidj became a blush tea dress with an uneven hem. Not to be outdone: Tiwi designs Jilamara print by Jean Apuatimi turned almost ’80s in a yellow, ruffled number.

Injalak worked with Blackcat Coture alongside Rise, an Indigenous women’s sewing group from Gunbalanya Community. Marcia Russell from Blackcat provided vintage dress designs that took on a completely different aesthetic in a range of screen-printed silks while still keeping a retro vibe.

The real standout for us was Marnin Studio. Relatively new, this art centre began as an art therapy program. In the four years it has been operating, it has decided to transform into a social enterprise program due to the success of its artist-in-residency program and the exquisite clothing and homewares that were being produced, which include white linen tops with simple lino-blocked patterns, bush-dyed silks, paper-bag skirts and modern tie-dyed silk dresses. We found a video for you to see it for yourselves and are catching up with the lovely Brooke Small from Marnin next week so we can delve into their philosophy and process a bit more.

A fabulous Madonna bra woven out of fibre was created by Margaret Rarru Garrawarra, who knows how to turn heads. We also saw the lovely scarves from the Artists of Ampilatwatja on show. Emily McCulloch Childs has been shaking up the contemporary jewellery scene for the past few years with the Indigenous jewellery project. She runs workshops for Indigenous art centres to promote, develop and upskill their practice. The latest offerings, called the “Bulay(i) Project,” have been developed with Buku-Larrnggay Mulka and were shown off on the catwalk. Djuwakan 2 (DJ) Marika was selected in this year’s Telstra Award for his work “Dirimbi, The Ring “cast in phosphorous bronze from a mould created by a stingray’s tail. Dirimbi is a special stingray that has rings on its tail, which Yolngu hunters wear as a trophy of their catch. We still don’t know how it didn’t take out an award.

So there you have it: The DAAF fashion show over for another year, and we can’t wait to see what next year brings.