The history of the Papunya Tula art movement 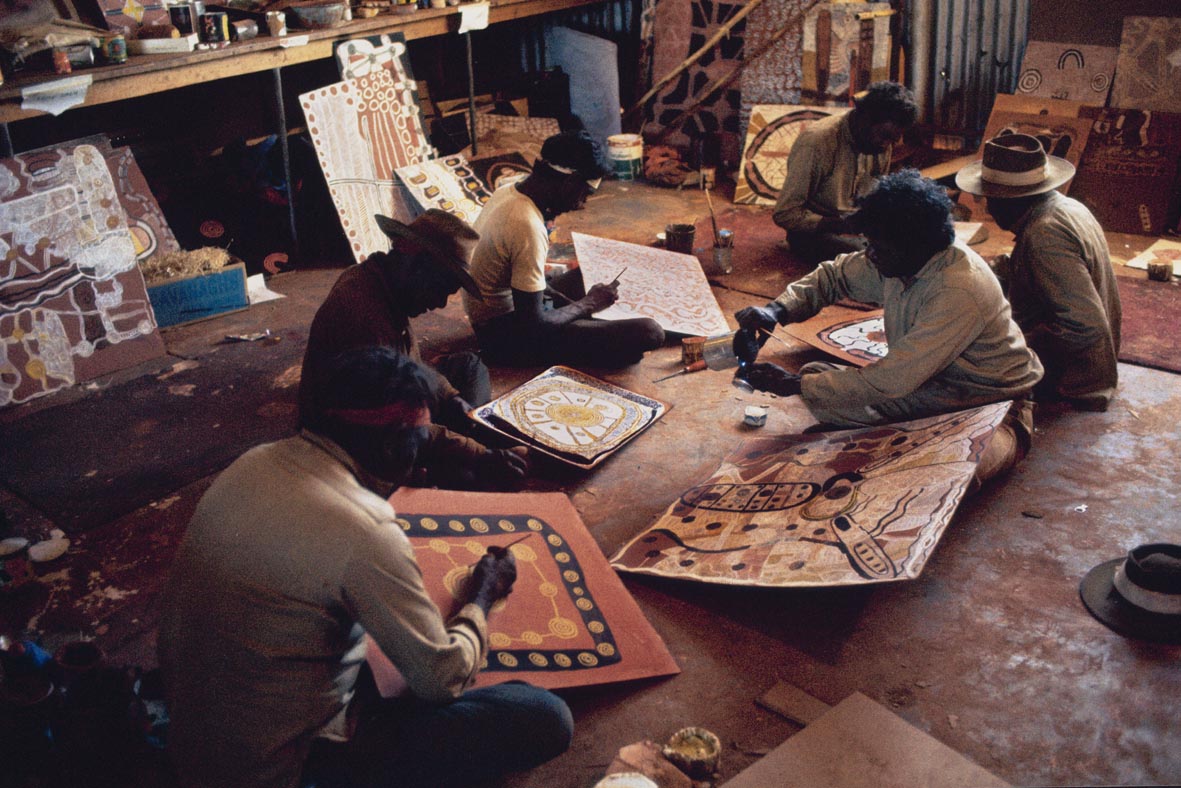 The first generation of Papunya Tula Artists painting in the Papunya shed, 1971 (Photo by Michael Jensen).

The Papunya Tula Art Movement began in 1971 when Geoffrey Bardon, a schoolteacher in the remote community of Papunya, encouraged some of his students to paint expressions of their own cultural traditions instead of teaching western conventions. Bardon was fascinated by the sinuous line drawings the children made in the sand and sensed their connection to social and ontological understandings. He encouraged the children to paint a public mural for the school using these images, however the children were reluctant. Eventually, a group of Elders came to Bardon and presented him with a design representing the Honey Ant Tjukurrpa (Dreaming story), an important story for the area.

Bardon, affectionately known as ‘Mr Patterns’ by the artists, arranged for some of the senior men to paint a mural on the school wall. A rotating group of men including Old Bert Tjakamarra, Bill Stockman Tjapaltjarri, Long Jack Phillipus Tjakamarra, Old Mick Tjakamarra and Kaapa Tjampitjinpa painted the mural over a period of weeks.

The resulting Honey Ant mural sparked tremendous interest in the community and inspired many more men to paint. Collectively, these artists produced the exquisite ‘Papunya boards’ – a body of paintings on boards and small panels based on ceremonial designs and Tjukurrpa (Dreaming stories). These men became the pioneers of the Western Desert Art Movement – the acrylic painting movement that exploded onto the contemporary art scene, forcing the international art world to take notice. 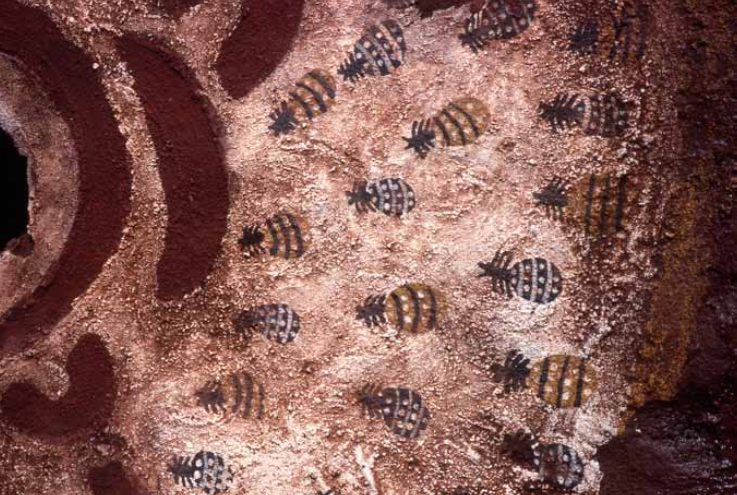 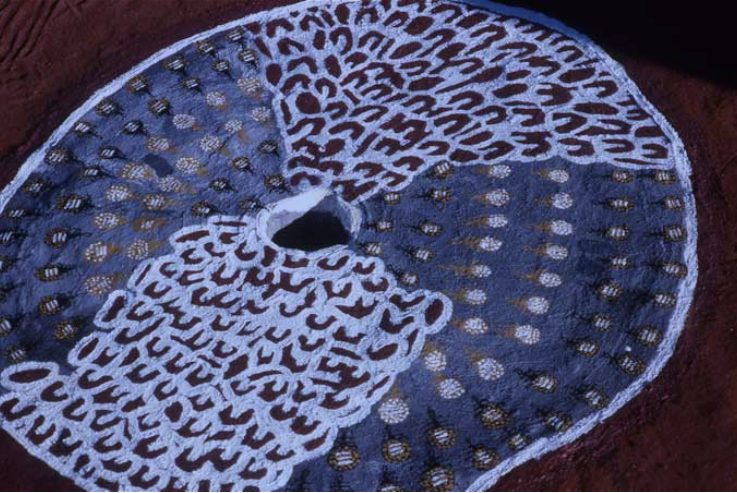 Below: Topsy Napaltjarri, Old Mick Wallankarri’s wife fixing the central pole into the ground in preparation for ceremony (Papunya, 1988). The pole is adorned with feathers fastened with hand-spun human hair-string. The Honey Ant Dreaming is now complete, and will form the ceremonial centre-point, around which the women will dance (Photos courtesy of the Australian Museum). 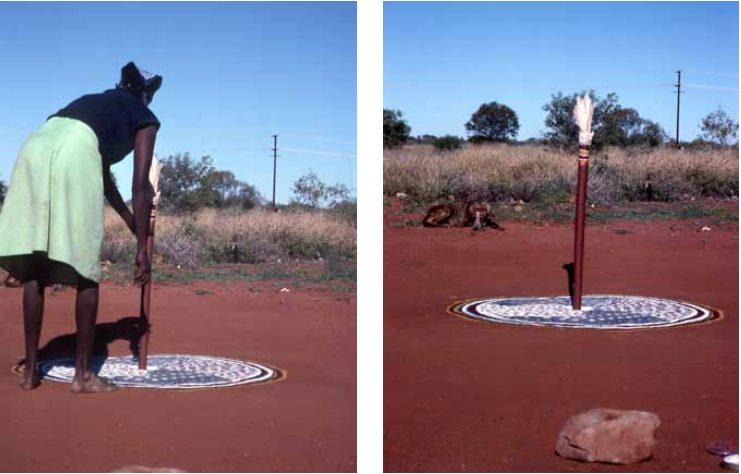 The movement grew, and in 1972 the artists successfully established their own company – Papunya Tula Artists Pty Ltd – the first entirely Aboriginal owned and directed art company in Australia. Papunya Tula Artists was named during a gathering of painters at Charley Creek near Alice Springs. Bardon asked the artists what they wanted to call their company, and Charlie Tarawa (Tjaruru) said, ‘Papunya Tula’ – the name of a hill outside Papunya meaning, ‘a meeting place for all brothers and cousins’.

However, Bardon and the artists came up against a great deal of resistance from the Papunya administration who thought that the Aboriginal-run organisation stood in opposition to the assimilationist policy of the time. The cooperative struggled against the criticism of government departments, and the Honey Ant mural was eventually painted over by authorities. Papunya Tula Artists defied these odds, and 50 years on, the company is one of the most enduring and successful Indigenous cultural enterprises in Australian history.

At its inception, the company and most of its artists were based in Papunya, a government settlement 240km north-west of Alice Springs. For many of the Pintupi and Luritja artists who had left or been removed from their semi-nomadic desert life, Papunya was a place of social unrest. They were not the custodians of the land on which they lived, and they longed to return to their Country. Following the homelands movement of the 1970s, many artists returned to their home Country in the heart of the Western Desert, where they established the communities of Kintore and Kiwirrkura. As a result, Papunya Tula Artists extends its operations into Western Australia spanning an area of 700km, with studios in both communities, as well as a central gallery in Alice Springs. 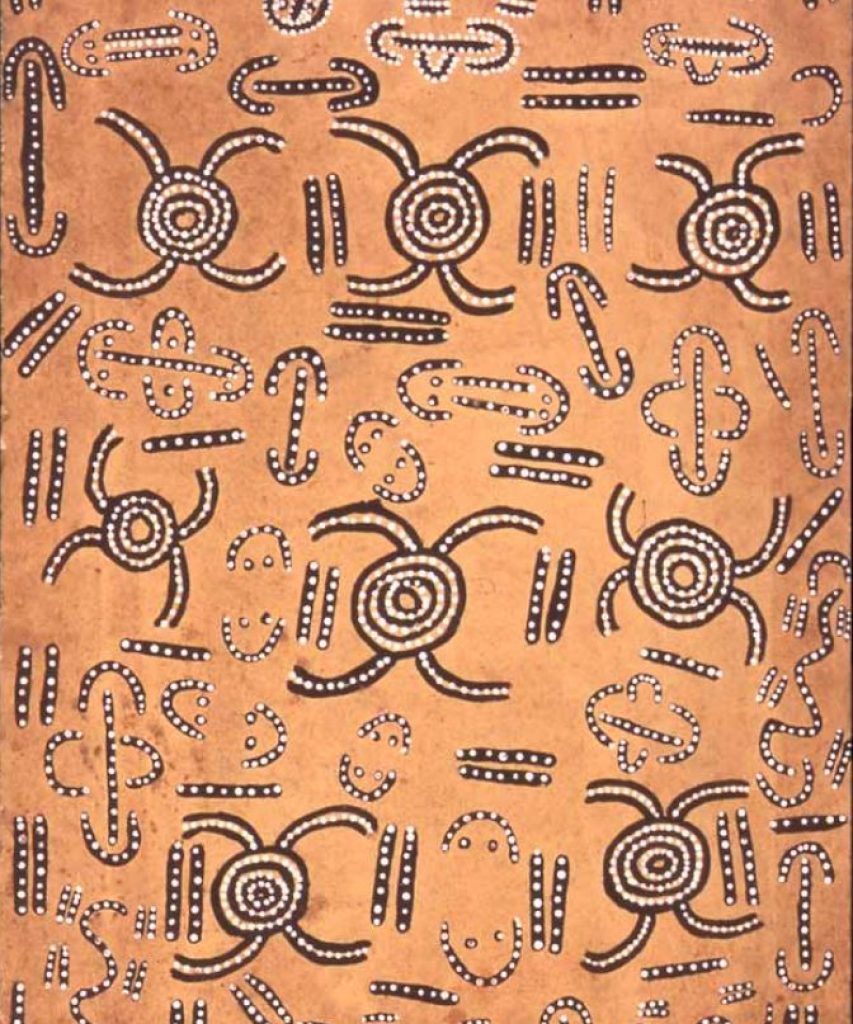 One of the original Papunya Boards, ‘Untitled’, attributed to John Tjakamarra, 1971-1972) (Photo courtesy of the Australian Museum). 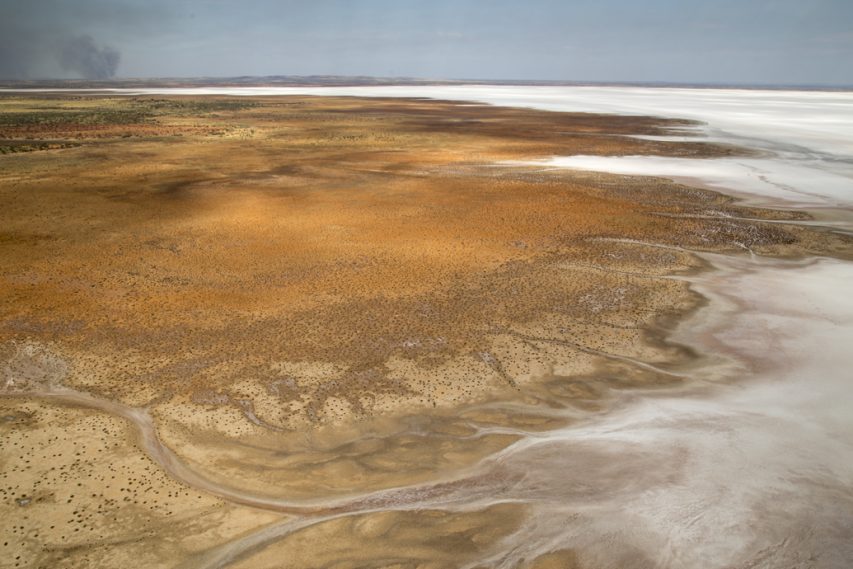 Today, Papunya Tula Artists is owned and directed by the original Papunya Tula artists and their descendants, predominantly of the Pintupi and Luritja language groups. The company has 50 shareholders and represents around 80 artists, most of whom live in Kintore and Kiwirrkura. The company operates within a wholistic framework, its core objectives being to promote individual artists, provide economic development for their communities, and support the maintenance of a rich cultural heritage. 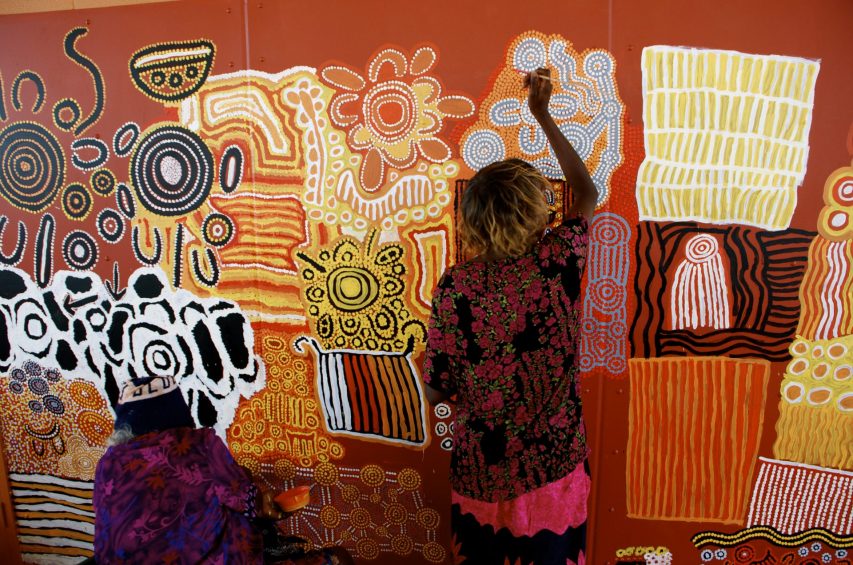 Kintore women painting the collaborative mural commemorating the 30th anniversary of the community. The mural depicts the Tjukurrpa (Dreaming Stories) of the region (Photo by Matt Frost, courtesy of Papunya Tula Artists). 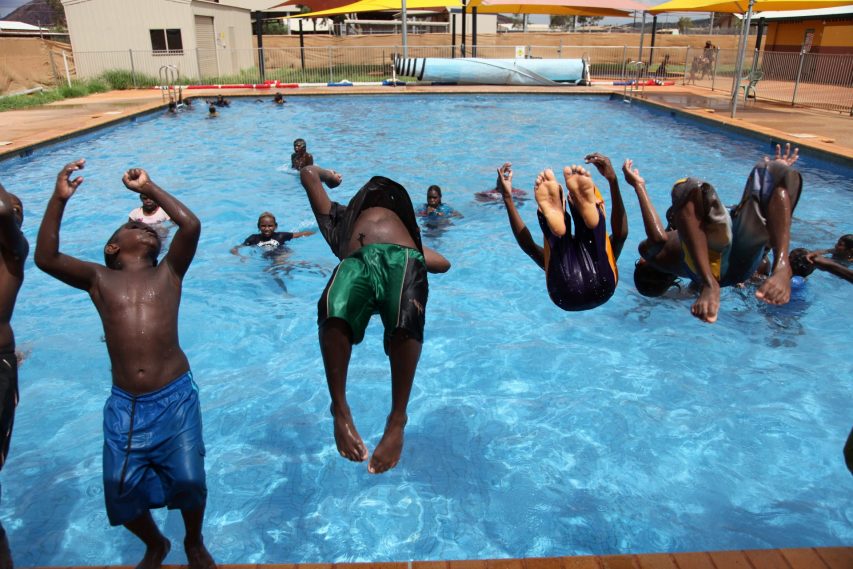 Over the last 50 years, the company has evolved into a profitable social enterprise that funds vital social and cultural services including the Purple House mobile dialysis service and the Kintore swimming pool and provides financial assistance for ‘sorry business’ and ceremony. This funding has become the lifeblood of these communities, allowing the people of Kintore and Kiwirrkura to continue to keep their culture alive on Country.

The internationally recognised Western Desert Art Movement has been instrumental in establishing a place for Australian Aboriginal artists on the contemporary art scene. The distinctive Papunya Tula painting style derives directly from the artists’ knowledge of traditional body and sand painting associated with ceremony. Portraying these esoteric creation stories for the public has a required the removal of sacred symbols, and a careful monitoring of ancestral designs – a process of community negotiation over time.

Since its inception, Papunya Tula Artists has become both an iconic art canon and model Indigenous enterprise, with original and new generations of artists creating awe-strikingly powerful works that continue to captivate audiences the world over. 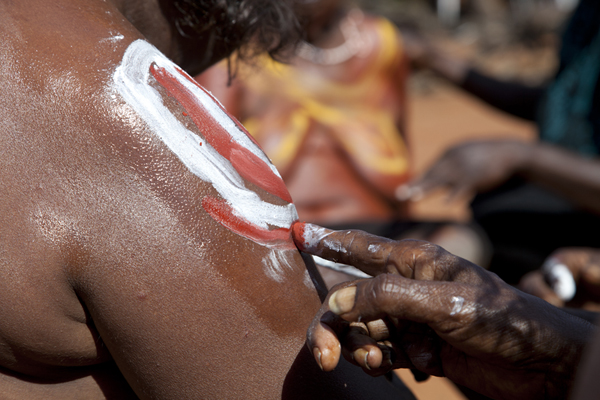 Above: Women painting traditional designs on their bodies in preparation for ceremony. These designs have been passed down over thousands of years, and appear in the paintings of the Papunya Tula Artists today.

Below: Detail of the Kintore studio, where the magic happens (Photos courtesy of Papunya Tula Artists). 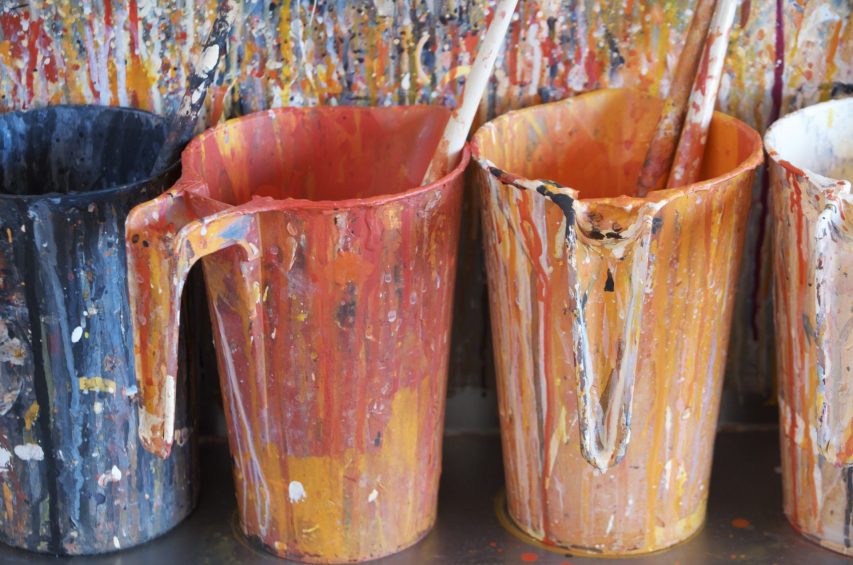 PrevPreviousFransisca, Champion of Chimbu
NextThe Pintupi NineNext
Liked it? Help us by sharing it on
Facebook
Twitter
LinkedIn